A poem, “Life Cycle of Clouds,” from Linda’s new book, The Blue Divide, was produced as a video by students from Western Michigan University.

Linda Nemec Foster‘s poem, “City of Stone, City of Trees,” was selected to be produced as a video/poem with watercolor animation by Matvey Rezanov (who worked on the Oscar-nominated film “Coraline”) and music score by Lena Orsa.

The piece was screened at the REELpoetry Video/Film Festival sponsored by Public Poetry in Houston. The Festival’s program was presented online to an international audience February 24-28, 2021.

Linda Nemec Foster was a featured reader for The Detroit Writers’ Guild “The Living Room Online Literary Series” on Sunday May 17, 2020.

Listen to Linda read her selections using the audio player below:

Poet and translator Lisel Mueller was a member of the original MFA Program for Writers faculty at Goddard College. Her collections of poetry include The Private Life, which was the 1975 Lamont Poetry Selection; Second Language (1986); The Need to Hold Still (1980), which received the National Book Award; Learning to Play by Ear (1990); and Alive Together: New & Selected Poems (1996), which won the Pulitzer Prize. Her other awards and honors include the Carl Sandburg Award, the Helen Bullis Award, the Ruth Lilly Prize, and a National Endowment for the Arts fellowship. She also published translations, including Circe’s Mountain by Marie Luise Kaschnitz (1990).

Over the past two decades, parents of young children have been able to pursue their MFA at Warren Wilson with the support of a scholarship established in Lisel Mueller’s honor by MFA alumna Linda Nemec Foster. About her friend and mentor, Linda says:

I first met Lisel Mueller in July of 1977 when I began my tenure in the first low-residency MFA Program in Creative Writing founded by Ellen Bryant Voigt at Goddard College in Vermont. (As everyone knows, that ground-breaking program moved to Warren Wilson College in the early 1980’s). During that first residency, I wanted to work with Lisel because of the powerful themes of mythology, folklore, and fairy tale motifs that informed so many of her remarkable poems. I was also fascinated with these themes and working on a long sequence of poems inspired by the Russian witch Baba Yaga. Lisel was the perfect advisor to guide my first semester as I wrote poems about Slavic mythology and read numerous books on fairy tales and scholarly research that revealed their historical, psychological, and cultural underpinnings. During my critical paper semester, I was fortunate to work with Lisel again as I focused on Rainer Maria Rilke and his seminal book, The Notebooks of Malte Laurids Brigge. Who better to guide my research and critical analysis than this native of Hamburg with her understanding of Rilke’s language, psyche, and creative artistry? The focus of these two semesters were totally different, of course, but one thing was constant: Lisel’s complete dedication to her job as a teacher/mentor and to my job as her student. Wisdom, patience, understanding, honesty. These were Lisel’s traits, but she also had another remarkable gift—to nurture her student’s own poetic voice and not impose her particular style or mindset. I was so fortunate to have her guidance as I started my career as a poet.

These are my memories of those MFA years, but I’d also like to share some thoughts about my relationship with Lisel after I graduated from Goddard in 1979. Over the years, our relationship continued to evolve and grow: Lisel became more than a teacher or mentor—she became a close and dear friend, like a member of our family. We developed a wonderful correspondence, sharing new poems and ideas about the writing life and our personal lives. My husband and I, with our son and daughter, would frequently visit Lisel and her husband Paul in their home in Lake Forest, Illinois. Such a wonderful house with a large yard, nestled on the edge of prairie grasses. We spent my first Mother’s Day with them in 1980 when my son Brian was only six months old. And when Lisel won the Pulitzer Prize in Poetry for her book Alive Together in April of 1997, it just so happened (miraculous, really) my daughter Ellen and I were visiting her and Paul for several days. What an experience to share that heady, celebratory time with her.

In between those years and ever since, I’ve collected a lifetime of memories of a woman who was truly extraordinary in every sense of the word: from her stunning poetry to her generous teaching; from her unique history to her amazing life. And, above all, hers was one of the most genuine hearts I’ve ever known. My good and dear Lisel.

For additional memories and remembrances for Lisel Mueller, please click here to visit the Friends of Writers blog.

https://www.lindanemecfoster.com/wp-content/uploads/2017/09/LindaNemecFoster_LOGO.png 0 0 Administrator https://www.lindanemecfoster.com/wp-content/uploads/2017/09/LindaNemecFoster_LOGO.png Administrator2020-04-04 10:30:422020-04-08 13:42:32Linda Nemec Foster has written a personal remembrance of her mentor and close friend, acclaimed poet Lisel Mueller, for the Friends of Writers blog. The blog is sponsored by the MFA Program for Writers at Warren Wilson College.

The book will be published in Spring of 2021.

Below is the official announcement from New Issues: 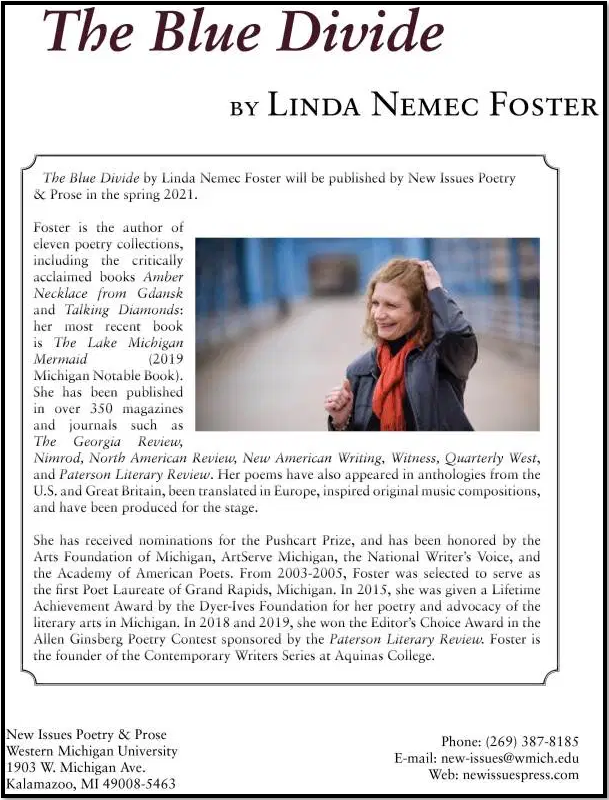 The following photos were taken during Linda’s classroom discussions, lectures, and meetings at the Academy of Technology and Humanities in Bielsko-Biala, Poland during the month of October, 2019. 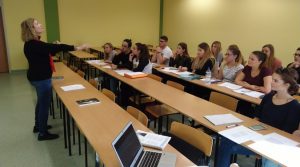 Linda teaches a class on translations and literary interpretations for an English language seminar (which includes Polish students and Spanish exchange students). 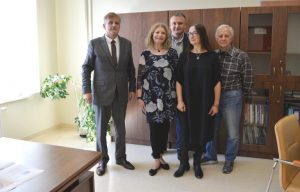 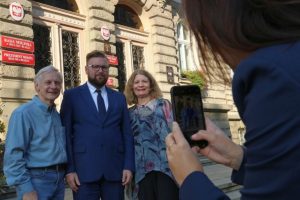 One of the sponsors of her residency was the city of Bielsko-Biala. Dr. Tony Foster, Deputy Mayor Adam Rusniak, and Linda Nemec Foster stand in front of the historic City Hall in late October, 2019.

The program and publication was presented to the International Joint Commission on Great Lakes in Traverse City, Michigan.

For more information about this environmental cause, visit the organizers’ (FLOW – For Love of Water) website at: https://flowforwater.org