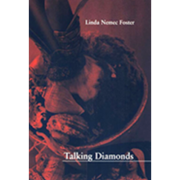 Linda Nemec Foster received her M.F.A. in creative writing from Goddard College in Vermont. She is the author of eight collections of poetry including Living in the Fire Nest, Amber Necklace from Gdansk, and Listen to the Landscape. Her poems have appeared in numerous journals including The Georgia Review, Nimrod, Quarterly West, New American Writing, and North American Review. Foster’s work has also been translated and published in Europe, exhibited in art galleries, and produced for the stage. She has won awards from the Michigan Council for the Arts, ArtServe Michigan, the Arts Foundation of Michigan, the National Writer’s Voice, and the Academy of American Poets. From 2003-05 she was selected to serve as the first poet laureate of Grand Rapids, Michigan.Other poems by Linda Nemec Foster in Verse Daily:
September 15, 2003: “After the War: Purple Flowers Spilling from the Windows” “In Poland, the land takes over everything…”

“In ‘Vision,’ one of many arresting poems in Talking Diamonds, Linda Nemec Foster’s protagonist sees Our Lady of Guadalupe in an unlikely Hawaiian setting. Half-waking from reverie, “she recognizes that the Virgin is in fact tattooed, front and back, on a native man: `And you tell yourself this isn’t a miracle,’ she writes, `only a tattoo; this isn’t anything/extraordinary, only your life …’ But that is precisely what makes her new collection so compelling: from what Wordsworth called the simple produce of the common day-a child’s piano recital, a family photograph, a wretched piece of motel art-Foster exacts an energy that is, precisely, visionary, even miraculous. This is an effort so widespread in contemporary poetry as itself to seem a commonplace, and one that generally fails. Not so in Talking Diamonds, which challenges, intrigues, awes, and ultimately gratifies, poem after excellent poem.”
—Sydney Lea

“A humanist at heart, Linda Nemec Foster has demanded from her poetry an artfulness that engages ordinary life. With each new book her work has continued to mature, deepen, console, surprise, and Talking Diamonds is as wise as it is lovely.”
—Stuart Dybek

“In this luminous new book of poems, Linda Nemec Foster shows us that there are no `ordinary’ lives, that each life is meaningful ansl even magical, whether we know itor not.-The brilliance and power of Foster’s language, which has been evident in earlier volumes, is even stronger in this book.”
—Lisel Mueller