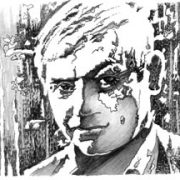 I first read the poetry of Zbigniew Herbert in the late 1970’s when I was in graduate school studying for my MFA in creative writing at Goddard College in Vermont. As part of the degree requirement, students had to teach a graduate level course to their fellow students and faculty members. My master’s thesis was on the poet Rainer Maria Rilke and my first thought was to teach a class on a subject I really knew well–Rilke. But my faculty adviser, Stephen Dobyns, told me that was “the easy way out.” When Dobyns discovered that I was of Polish heritage, he told me to teach a class on what he considered to be the best poetry being written on the planet: contemporary Polish poetry. So I immersed myself in reading all the Polish poetry in translation I could get my hands on and decided to concentrate on teaching Milosz, Rozewicz, and Herbert for my class. The experience was a touchstone for my graduate work and my poetry. Although Milosz won the Nobel Prize in Literature the following year (1980), my favorite was always Herbert. Herbert–with his historical irony and precarious equilibrium that (as Milosz has stated) “endows the patterns of civilization with meanings, in spite of all its horrors.” Herbert’s poem, “Apollo and Marsyas,” is the perfect example of this precarious balance. In 2000 I visited Warsaw for the first time. There, at the Adam Mickiewicz Museum of Literature, I saw a remarkable exhibition devoted to Zbigniew Herbert’s life and work, his poems and critical writings. In a glass case–inches from my hands–I saw first drafts of some of Herbert’s more famous poems. In his own handwriting, there was “Apollo and Marsyas.” Right before my eyes. I was so overwhelmed, it literally took my breath away.

Linda Nemec Foster
A Man Praying in a Field
He could be dead, this man praying in the open
field between Warsaw and Poznan. He doesn’t
merely kneel, but lies down and places his
whole body against the body of the earth: as if
he’s listening for some small breath to match his
own. This is how people must have prayed
to their gods before the idea of God forced them
into small country churches and ornate urban
cathedrals. Before the invention of pulpit and
incense and the creation of man on a ceiling
in Rome. Here there is only the hard earth and
a man lying down to pray to it. He wears a dark
suit, black shoes, his hands open in supplication.
You cannot see his face, hidden as it is by
the coarse wild grass he worships. Soon dusk
will approach the man and call his name. Only then
will he rise from his prayer as if startled from sleep.
Barely remembering who he is, he walks away–
each foot lightly touching the ground.

Originally Published by The Scream Online